Attacked Israel forces in the area of international waters 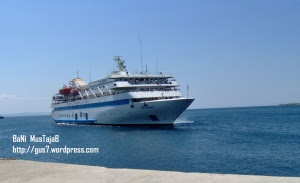 Mavi Marmara ship contains assistance for residents of Gaza were attacked Israel forces in the area of international waters, about 65 km from the coast of Palestine.

These heinous acts are also the Israeli military spokeswoman, Avital Leibovich, who said that the attack occurred in international waters. He said: "This happened in the waters outside the territory of Israel, but we have a right to defend ourselves."


For the umpteenth time we have witnessed the atrocities of Israel. Their behavior as if no longer as generally human dignity.

As reported, the Turkish-flagged ship was not only contains 10 000 tons of humanitarian aid materials, such as medicines, food, hospital equipment, school supplies, toys, water purification equipment, construction materials and nutritional needs of toddlers.

But the ship also contains more than 750 people from 40 countries, from various professions and also include members of the Israeli parliament. Among the passengers there were women and children. Recorded so far, 35 MPs from 15 countries, 20 journalists from various television channels, diplomats and former officer in the U.S., Nobel prize winner and others.

In fact, this ship was escorted by several other ships of smaller size originated from Turkey, Greece and England.

This is the first time since the three-year Israeli blockade on Gaza was attempted to be penetrated by a ship carrying humanitarian aid.

But they can not stop animal passion for attacking Israeli soldiers indiscriminately against the passengers on board. And every time they do, there's always excuses put forward, such as Avital Leibovich said above. Even more heinous their actions from pirates.

Justification for murder, as if all the citizens of Israel have a license Killing (Licence to Kill).

Until this writing, there were about 19 people were martyred and dozens more were injured in that heinous event. Although there has been no news about the fate of volunteers from Indonesia who was in the ship.
hendra 1 Komentar

Bali is the best place to have your vacation and bonding with your friends and relatives especially if you visit the seminyak villas.