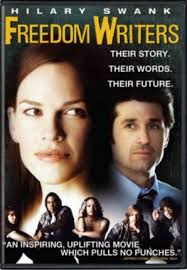 Hilary Swank stars in this gripping story of inner city kids raised on drive-by shootings and hard-core attitude - and the teacher who gives them the one thing they need most: a voice of there own.

Dropped into the free-fire zone of a school torn by violence and racial tension, teacher Erin Groundswell battles an uncaring system in a fight to make the classroom matter in her students lives.

Now, telling their own stories, and hearing the stories of others, a group of supposedly "unteachable" teens will discover the power of tolerance, reclaim their shattered lives, and change their world.

Three years later, I think many of my friends who write and see what is happening in our great Republic could offer a sequel.

This new American tale features Constitutional patriots living in Barack Obama's America. Fed up with the obvious disregard of the Constitution demonstrated by Obama's attack on the Fourth Amendment in recent weeks in hopes of tracking all Americans with their cell phones, Obama's out of control spending, and Obama's desire to make more Americans dependent on government, the Internet gives these patriots a voice to expose what the mainstream media isn't. With the desire to fight for the visions of Thomas Jefferson, George Mason, James Madison, and George Washington, they take their bandwidth hoping to inspire Americans to take up the cause of liberty and freedom before it's too late, and they won't rest until what is rightfully theirs through rights endowed by their creator are reclaimed and the Obama administration is shattered.


You know, it would have been just easier to teach the true freedom writers in our public schools, and make kids realize the importance of their work. They left the Declaration of Independence, the Federalist Papers, and the Constitution. I can't think of a greater group of freedom writers.