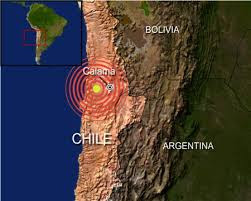 The honor of greatest earthquake of all time goes to the 1960 Chile earthquake because scientists were able to 'catch this one on tape'. In other words, there have been a lot of really big earthquakes throughout human history (and even greater ones before we came on the scene), but this one they were able to measure, record and verify its ground motion strength. The instruments that seismologists use to measure earthquake magnitudes are designed to detect the amount of energy released by the movement of the ground during a quake.

In the case of the Chile earthquake, the amount of energy released during the quake, not the number of human deaths and damage to structures, earned it the title of greatest. This earthquake was the largest ever instrumentally recorded. It measured a 9.5 on the Moment Magnitude (Mw) scale, but registered only an 8.5 on the Ms scale.

The epicenter of the earthquake (the point on the earth's surface directly above the focus of an earthquake) was 60km down below the ocean floor about 100 miles off the coast of Chile out in the Pacific. The nearby towns of Valdivia and Puerto Montt suffered devastating damage because of their closeness to the center of such a massive quake. The loss of human life was not as bad as it could have been because there were large foreshocks that sent people into the streets talking.

About 30 minutes after the foreshocks, when the main jolt came, many people were still outside calming their jitters from the first shock. The buildings and homes that fell had pretty much vacated. However, damage cost estimates were over a half billion dollars.

Not only was there damage to man-made structures during the quake, but the earth itself was forever changed by the enormous amount of energy released from below. Huge landslides, massive flows of earthen debris and rock, were sent tumbling down mountain slopes. Some landslides were so enormous they changed the course of major rivers or dammed them up creating new lakes. The land along the coast of Chile, particularly in the Port city of Peurto Montt, subsided (sunk downward) as a result of the movement of the ground during the quake and the coastal city was flooded with ocean water.

The damage from the quake was not limited to the nearby shores of Chile. Enormous waves, or tsunamis (read about the world's biggest), traveled for thousands of miles across the vast expanse of the Pacific Ocean, reaching the shores of Hawaii, the Philippines, and even Japan devastating everything in their path. The tsunamis were created by the shifting of the sea floor that generated the huge temblor. It was as though someone had dropped a huge boulder in the ocean right over the epicenter of the quake, sending enormous ripples in every direction, traveling at speeds up to 200 miles per hour!